June 29, 2011
My sister visited Newport last week from Florida, sans husband and sons, which is unusual for her... so she and I had plenty of opportunity to be kids again together. I actually had some free time, which is unusual for me, so we did some day-trippin and enjoyed some of the wonders of Lincoln County. First we went south to Florence. Had to stop for some photo ops. 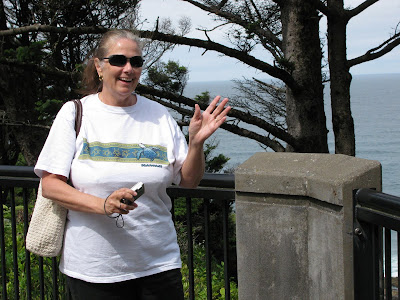 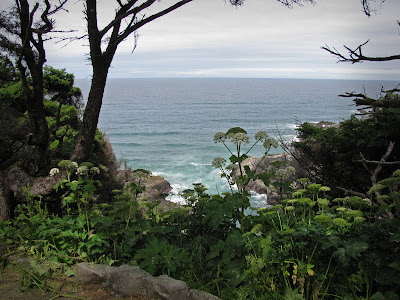 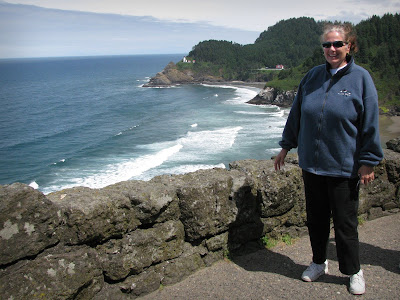 Had lunch on the waterfront in Florence while we took the opportunity to wander the bayfront there. 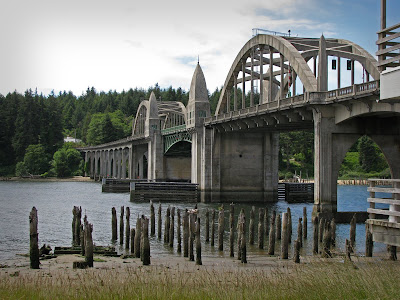 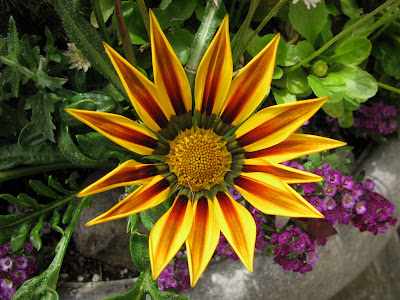 And then we did the white-knuckle ride on the dunes... man what a blast. It's like an hour-long roller coaster but thru natural dunes that cover 75 square miles. If you've never done it, I highly recommend it. I got to ride shotgun (YES!!), and Linda is right behind me. 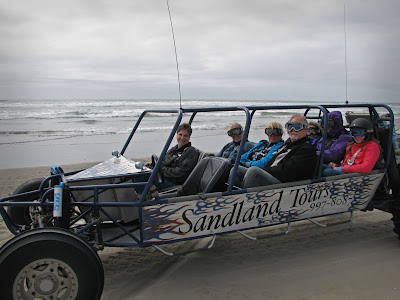 This is our driver, Rick. He did an awesome job... very exciting! 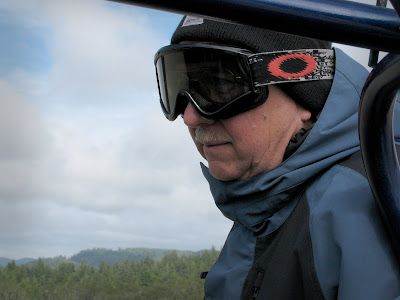 He'd stop for photo ops and take pics for us with our own cameras. What a trip! Linda wanted to try to do it again before she left but the to-do list was just too long. So it's on the list for next time. I can't wait. 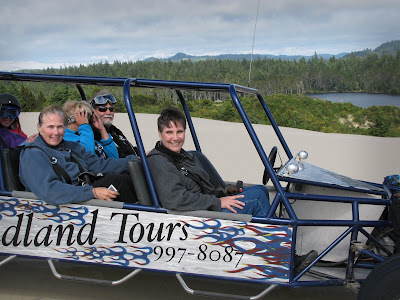 We stopped at Darlingtonia Botanical Wayside just north of Florence. Awesome stop if you've never seen it. This is a flower of the Darlingtonia plant. 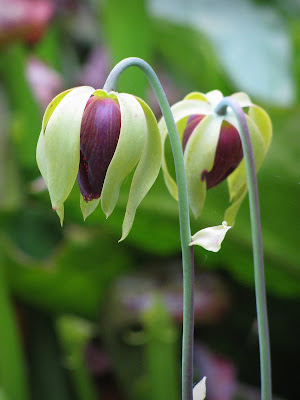 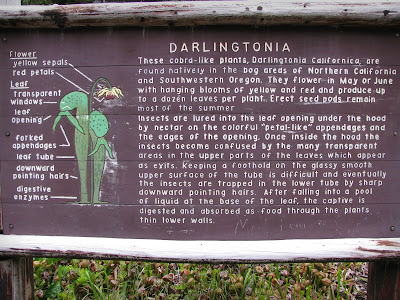 We had to stop at Jump-Off-Joe, my family lived in the little white house that used to be there when we first moved to Oregon in 1966. Good memories there. We were only there for about 3 years. That was long before I met Linda... guess that must have been 1970. Yes, she is my sister from another mother. 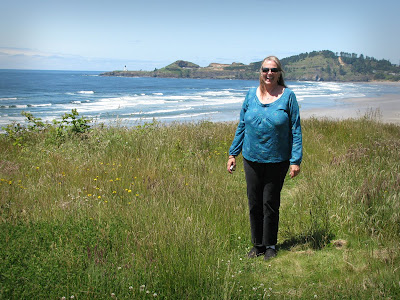 Then we went bottom fishing out of Depoe Bay on the Amigo. Skipper/owner Perry York was Linda's husband Jeff's business partner in South Beach Charters when I started working for Jeff as his deckhand on the 50' charter boat the Cricket in the early 80s. Time warp...

We had a great time... I'd never been fishing out of Depoe Bay so it was especially awesome. 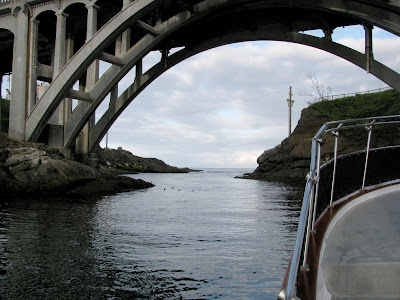 Linda had a great time, we both love to be out on the ocean and love to fish. It was kinda chilly but the sun was out and the ocean was nice. A great day. 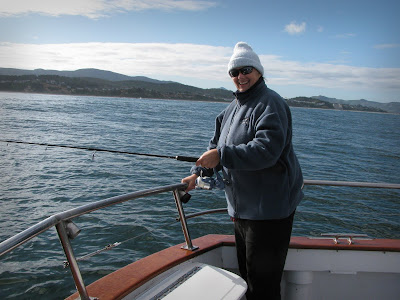 Here Linda chats with Perry while he takes a break. 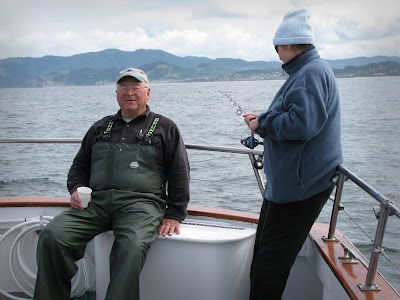 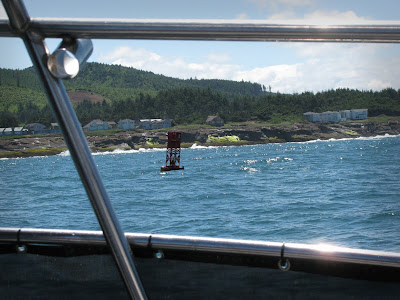 Driving back from Depoe Bay, Linda had never seen the Otter Crest Loop before. So we took that detour. This is the Ben Jones bridge on that road. 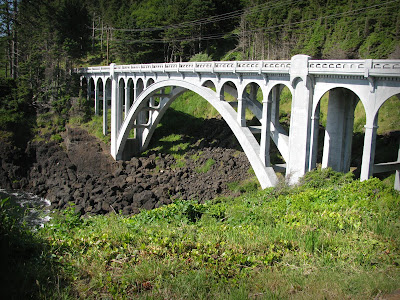 Then we went halibut fishing with Dell on the Ilwaco Indian out of Newport. 30 miles offshore to the 'chicken ranch' and the catching was steady all day. We all got our one halibut, and several ling cod were also caught but they had to go back. 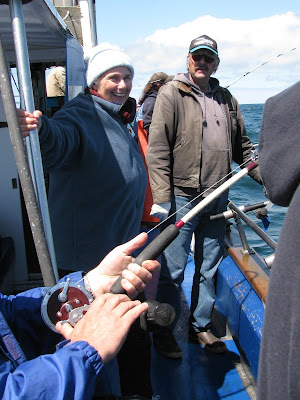 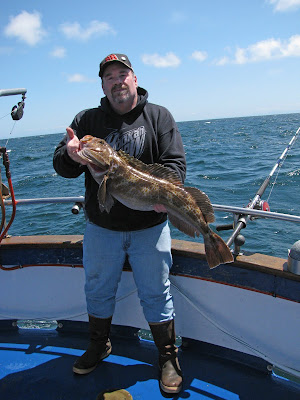 Here we are with our skipper and our fishies... nothing better than fresh fish. Yummy! 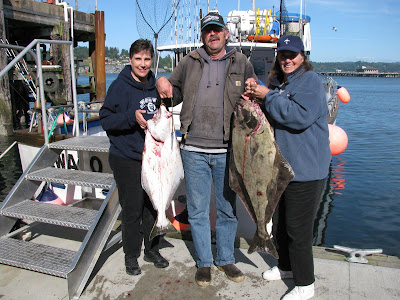 Saw this parked in town... made me smile so I captured it... 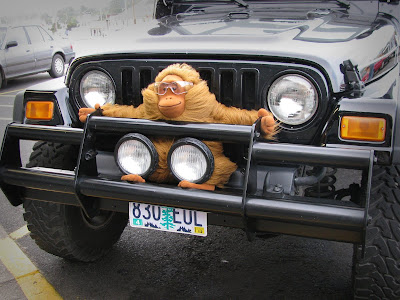 Our dad's birthday is in August... he'll be 85. Unbelievable. But Linda won't be here to celebrate so we did it while she was still here. 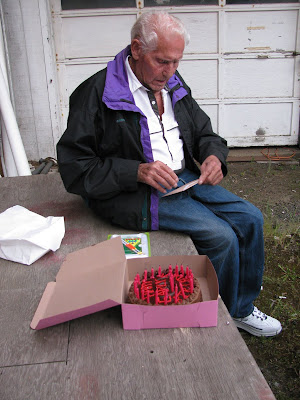 We had to go to the aquarium the day she left... and everyone has to get a pic like this. When Linda visits, she and I both become ten again... we have such a good time together. It's wonderful to have a sister connection with someone who 'gets it'. I already miss her and can't wait to visit with her again. She and her hubby Jeff are off on other adventures now before they head back to the little latitudes of home. 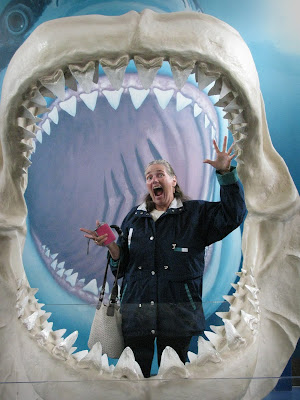 She was able to accompany me on a family portrait session at the Adobe in Yachats so we took the opportunity to get some more fun shots there... it was a beautiful day and obviously a very beautiful setting. 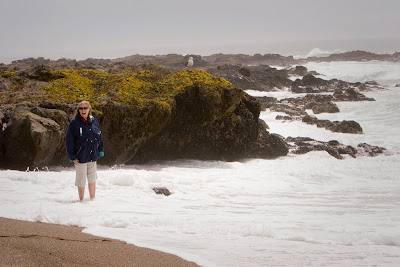 I actually let her get a pic of me... pretty unusual for me. LOL - she has promised to send me the pics from her camera when she gets home... she got some really good ones. 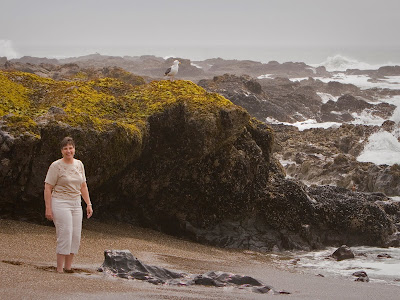 Typical tourist, not paying attention to the waves... 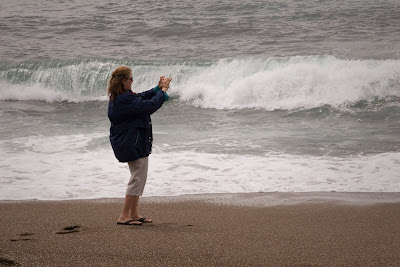 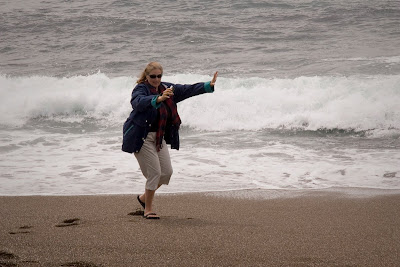 We did so many awesome things this week, I can't list them all... but we had some great adventures together. Love ya, sis.

Popular posts from this blog 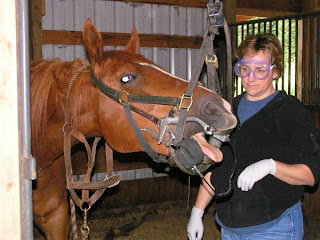 Recently my friend Brooke had an appointment for annual health care for her 8 horses and mules, so we hauled Lucky and Lacey out to her place for their vet checks and annual care, which includes floating the teeth. Yikes. This is quite the operation. First the horse is sedated until the knees start to buckle, then they are fitted with this contraption. And yes, it's called a speculum. Then the vet grabs this drill-like tool with a long rod and a rotating grinder on the end and grinds the molars back down to smooth so the horse has an efficient surface to process their food... Its a difficult thing to watch, but necessary for their health. I'm glad I'm not a horse. Brooke brought her horse Mocha out to where Lucky lives and we rode up in the hills above the valley, what a beautiful ride that was. A recent morning had me out in the yard again with my camera. Things are growing beautifully. I get a dozen strawberries a day out of my patch. Yum! I'm looking forward to se
Read more 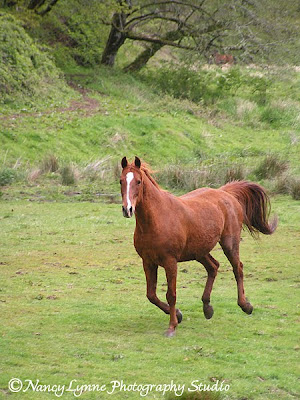 My mom was always so good about reminding me to post on this blog, she wanted to see the newest pics of what I'd been doing. My apologies for not posting for a while. She passed away on November 2nd after having surgery to insert a rod into her femur, which because of her osteoporosis had been broken by the tumor growing inside it. She was anticipating radiation on that tumor and another on her upper arm bone after she'd recovered from the surgery. The tumors were very painful and she couldn't undergo radiation with the broken femur. Anyway, I miss her very much. Thank you to everyone who expressed condolences. On December 14th, my beautiful Lucky was apparently struck by lightning in the pasture and was killed. I am grateful that he was a big part of my life for 13 years. We had so much fun together at the beach and in the woods, he just loved to go exploring. I adored this exceptional horse and my heart is truly broken at his passing. Lots more difficult and distr
Read more